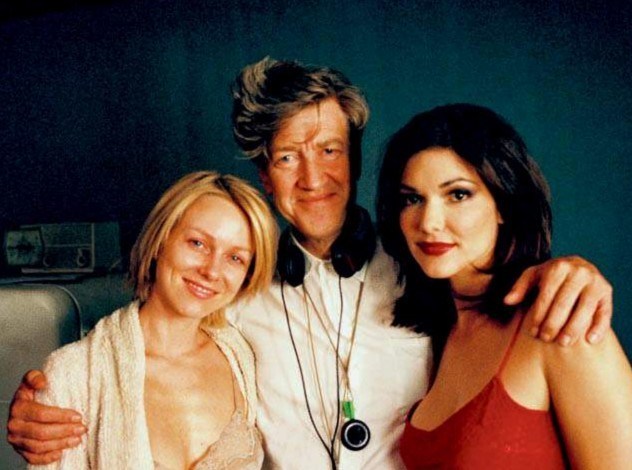 David Lynch’s Mulholland Dr. is a movie that begin with a linear narration but in the continuation of the story its narration is changing to nonlinear narration. A mysteries story that broken chronology which remind us surrealist cinema. The audience’s mind slips between reality and illusion. He is not sure what is watching is a true or is a dream. I should say it has a combination of a restricted and unrestricted narration because director leads us to a mysteries world that everything has different meaning from what showing us. David Lynch’s tool for make an illusions scene in addition of nonlinear and restricted narration is completed by beautiful lighting design in this film. High contrast light made mysteries shadows that help to be more suspicious.

In Mulholland Dr. all of the Mise-en-scenes are working to show a secretive story. In the beginning the story the black hair daughter rescued of two killer men that we don’t know who are they? Street long shot with shiny Mulholland Dr. street sign wants to say us that the story will happen in this location. Using and showing the names of street such as Mulholland Dr., and Sunset Blvd. refers to characters and their situations. As we know Betty is a young woman who come to LA and her dreams is a become a Hollywood actress. So, these street and locations refers to main characters locations.

One of the most beautiful Mise-en-scene in this movie is about light design. That we should considering it. Light designing in Mulholland Dr. I should say it’s interesting that how David Lynch has shaped the image to emphasize the mysteries content and catch our mind and attention to his story. Darkness and sharp lighting force audiences to entire character’s story. Subconsciously we are expecting about mysterious and illusion happen. The director has usually been used of lighting as an important part of creating new meaning of every subject in scenes. Display light and dark lead our attention to specific point in every scene. Generally, we can claim that light design can shapes a composition of picture. For example, in 00:35:56 second of this film that a man called Mr. Rock who sits on a chair and speaks with a machine we see just this man and his bodyguard behind him and a table but light design in this scene make a balance composition and define the man magnitude. Darkness in the right with darkness between the two curtains in left side and the key light on the bodyguard that light him face and part of his suit help to balance this scenes composition.

Using soft lighting and diffused light shadows in some scenes help to making illusion story. For instance, in 1:11:39 second when Betty is taking by the manager who a woman with stylized makeup in the yard, I think the director wants to show us that this home and its neighbors are not completely realistic. Use the soft lights, diffused soft shadows, two vertical light behind the Mrs. Coco plus natural light and make a dreamy scene. Don’t forget that top lighting in this scene that bright Betty’s blond hair and her white face created a glamorous image. We see this top light design in many scenes of film such as when Betty arrived to LA and in the airport she is talking with old couple or in 1:13:33 second when Betty getting out of the car and see the building that she wants to go there for her audition. I can claim that the director used of all these lights designing to attack audiences slowly and tell don’t trust to this Betty because might be she is not real Betty.

As I mentioned in the first paragraph about David Lynch surrealistic narration and mise-se-scene I can conclude that how the director used of light design along with the A linear narration to build up doubt and suspense scenes that force audience what may be existing or which picture is realistic? In the beginning of the film we see a car that is coming of the darkness and two men wants to kill a woman with black hair, black dress, and red sharp lipstick, that this make up in her shiny white face dark location with hard lights and glamorous remember us the noir genre. This film has restricted narration that until the end of the movie audiences are discovering about characters and happens. Our knowledge about the characters is limited to what we watch in the film and in continues audience is figure out some new aspects of characters and their related happens. Slow change in characters traits, locations, and even characters appearances need to a tool for new definition. That lights are coming help to narration for making successful mysteries story.

In conclusion, I would like to say that light design, attractive narration, make up, composition that very was dependent to light design in this film, are some important point in this film that have been used by the director to give audience’s attention and stared them to his mysterious film. So perfect mise-en-scene that I talked about lighting and the A linear narration help together that this story became Mulholland Dr.